oh wow, it's been quite a while since i last sat down and just dorked. heh. felt good. maybe a change in layout is due around here, in the first place (it has been raining like crazy, and it's hardly summer anymore, yeah?). but in the meantime, i added december 2006 and january 2007 in the old blog backup and right now, i'm looking at coding a pretty prolific year. \o/

on other news, the girlfriend's lj is looking pretty ~sweet today. YEAH.

still, on other news: i am digging anberlin's new surrender album. god i thought i've moved on from this kind of music, but. heh. don't judge me.
Posted by kate at 1:12 PM No comments:

Email ThisBlogThis!Share to TwitterShare to FacebookShare to Pinterest
Filed under: dork, personal

I hope that history will judge me as favorably as our people still regard me, because, as God is my witness, I honestly did the best I could. No more can be asked of any man.

On June 30, 1992, the traditional ceremony of political succession will unfold at the Luneta. The last time it was done that way was in 1965. I shall be there with you to proudly witness the event. This is the glory of democracy, that its most solemn moment should be the peaceful transfer of power. 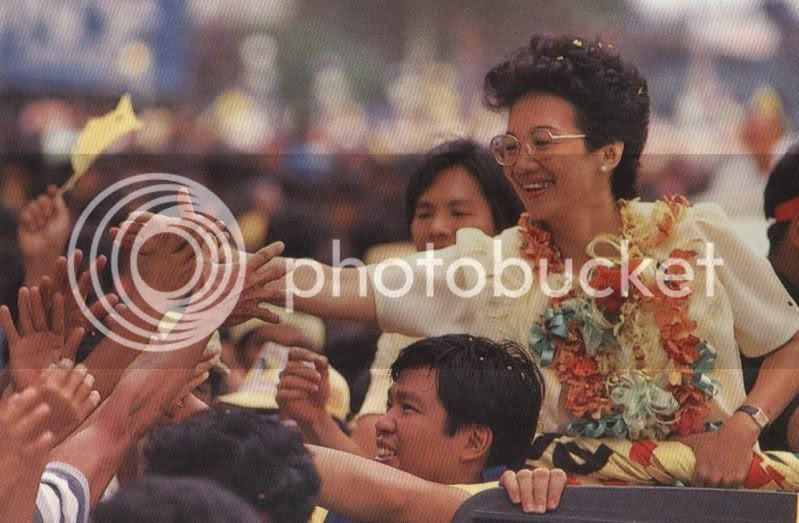 I have no words for this grief.

I woke this morning around half past seven to several messages containing the same news: Former president Corazon Aquino, icon of democracy and People Power, is dead. She was 76.

Upon getting the news, I went to work with my coffee in tow to get further ahead with captions. On Thursday, a few of my co-workers headed to Tarlac to visit the Aquino Museum to get a few photographs of Mrs Aquino. We agreed to finish captioning them ASAP. This was last night.

The fact is, we saw this coming. It was not sudden in any way; it was a year-long battle with colon cancer, after all. A few days ago we were even shaken by false news that the much beloved former president was dead. And honestly, I don't think any Filipino has been prayed for this hard ever.

But then, perhaps nothing could have really prepared us for this eventuality.

A few hours ago, I was watching the live sky patrol of Cory's hearse being transported from Heritage to La Salle Green Hills, where the public could view her until 4 a.m. tomorrow. Her hearse traversed Edsa slowly, as funeral hearses are wont to, and surprisingly, all the other vehicles gave way, which is just the rarest thing, and I think it's rather safe to assume the people driving behind Cory's hearse weren't grumbling but were rather proud to have been part of some informal entourage.

It just goes to show, what the Inquirer said in its editorial on Cory ("Eternal Flame" via inquirer.net) is true: "Unity is a rare thing in our country; we have it now; and adding to the feelings of grief is the wistful realization that it took the passing of Cory to reunite a divided nation."

President Aquino's passing marks the passing of an era -- if not the starkest mark of it. I will remember this as one of those distinct moments when I felt I aged significantly. I was born a year after her husband Ninoy Aquino was assassinated on that tarmac; in other words, right in the middle of an angry nation slowly inching toward a breaking point. God only knows what would have happened, had this country not seen a woman of Cory Aquino's strength and courage, or People Power altogether.

As a person working in the media industry, I feel like I owe Mrs Aquino for this freedom of expression that the Philippine press is currently enjoying. I have no words for the weight of this feeling -- of responsibility, of gratitude -- and to use a phrase I've seen somewhere, we can only use such small words for feelings so enormous.

There was an interview on ANC a while ago, where the interviewee says something about how we as Filipinos have been looking at symbols too long, and that maybe her death wants to tell us, Maybe it is time to look inside ourselves.

I think it's a challenge, and I think it is time to take it.

I think it's going to be a very interesting 2010 Elections.
Posted by kate at 7:08 PM No comments: