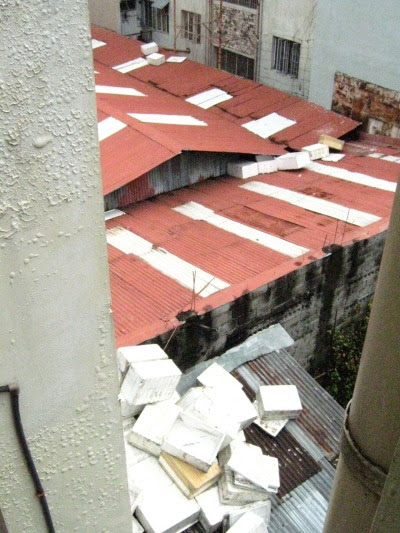 This morning, I woke around 6 a.m. to the sound of howling winds; as expected, Typhoon Santi passed over Metro Manila quickly, but not without its promised strong winds (we were under Signal No. 3 as of last night) and some rain. A few minutes later, power went out. We assumed the winds had toppled some important electric posts.

Opening the window around 10 a.m., we saw a curious sight: The neighbor's roof was full of styrofoam boxes. We're still wondering where they came from.

Right now it's still quite cloudy, and we're still on our toes re: strong rains tonight. Since Ondoy last September, it feels like we're on eternal storm watch. You know something's up when you connect to the Internet for the purpose of getting weather updates on Twitter, the latest satellite map from Pagasa and a status update for dams in Luzon - in that order.

On other news, I'm looking forward to visiting my mother's grave tomorrow; will be praying for good weather.

Also, all this news calling for Comelec to extend voters' registration -- I think, on the upside, at least A LOT of people are looking forward to voting on May 2010? Just a thought.
Posted by kate at 3:10 PM No comments:

Email ThisBlogThis!Share to TwitterShare to FacebookShare to Pinterest
Filed under: news, personal, photos

summary of this day

or, alternatively, a last ditch attempt at responsible citizenship

today, 3 days before voter registration deadline. by virtue of missing the 2007 midterm elections and the 2007 barangay elections, i was deactivated as a voter, therefore i need to reactivate myself if i want to vote in may.

6:45 a.m.: arrival at makati police headquarters (ayala extension, beside makati fire station) for police clearance. i need this because i don't have an ID that has my new makati address on it (i've been living in makati since july 2007 - 2 years, 3 months. At least 6 months of residence before May 2010 makes anyone eligible to vote in an area, fyi.) i pick up a form, fill it out, submit it to the manong on duty. i am ninth in the queue. this makes me very happy.

the makati comelec office is on the second floor of the makati fire station, fyi. however, when i got there, i was told that they were no longer releasing forms and that i should head to glorietta 4.

2 p.m.: time of registration end. (including an hour-long lunch break, that i spent in my seat, reading.)

this afternoon in glorietta while i was waiting in line in Step 2 (when you already have your form), this girl from UP who has already finished her registration process was walking around helping people fill up their forms. she says she's paying it forward. it's a shame i didn't get your name, but girl, mabuhay ka! :)
Posted by kate at 3:24 PM No comments:

Email ThisBlogThis!Share to TwitterShare to FacebookShare to Pinterest
Filed under: elections 2010, personal, work

i discovered geocities in 1999, when i first started dabbling into web publishing. my very first website was a compilation of musings. i was fifteen. i used ms paint and netscape navigator's composer (mirc. icq. 15-hour-per-month postpaid internet accounts. edsamail.) i feel so ancient it hurts haha.

i've got everything backed up in CDs strewn all over the place - the website i put up for my high school friends (1999), ajss (2000), yeba (2001). 5 versions of my personal website, including one that housed all of my submissions for my erotica class (!!!).

from this day onward, they are now inaccessible, save for the yeba websites, which i moved to my personal domain a few years ago.

sigh. i'm actually quite relieved that my earlier efforts at webdesign are now off the internet -- i didn't have the heart to erase them, but they were absolutely hideous LOL. but yeah, i loved them dearly, and now they're gone. (except in CDs, which i think i will unearth later tonight in a bout with nostalgia.)

geocities, it's been quite a ride. thank you!
Posted by kate at 10:30 AM No comments:

Email ThisBlogThis!Share to TwitterShare to FacebookShare to Pinterest
Filed under: dork

things that have been eating my life so far

1) last thursday, we marked 25 months together, and thinking it should be a milestone, i sent flowers and cake to her office address, in conspiracy with her immediate supervisor and other officemates.

i must say, for somebody who absolutely sucks when it comes to surprises, that one went pretty well. to wit: 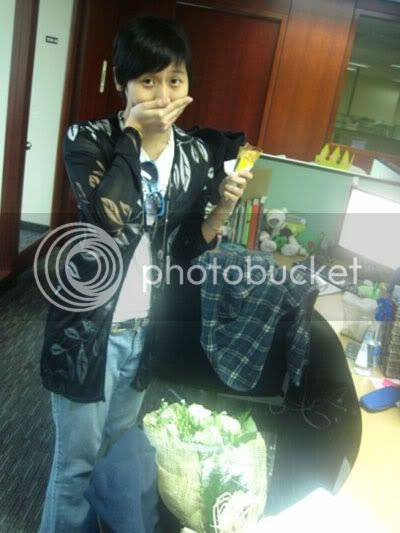 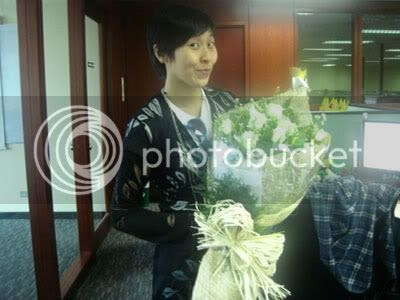 (photos taken from Becky's facebook. thank you so much!)

3) onslaught of typhoons, floods, natural calamities. at the work front, it's been pretty hectic since ondoy hit the country on sept. 26. fact: i've spent the past few weeks dreaming about maps of rivers and dams. once, i dreamt someone was asking me about the location of the ambuklao dam, and i woke up with "itogon, benguet" on my lips. i kid you not. sometimes, i take my job way too seriously.

i miss my words. a lot. lately it's been all about relief drives and dams and the Read-Along (incidentally -- another Quill award this year. yeah.) i wish i had more time to sit down for fiction, but lately, idk. words and i are just NOT friends.

and i've been spending far too much time singing an old song by the backstreet boys with my workmates. not that *that*'s a bad thing, but, you know. i mean, just this evening, in the aftermath of a rather splendid night out with them, we were operating on very little sleep that we ended up just laughing ENDLESSLY over, um, virtually nothing. idk, but what's up with that? :) it's awesome, really.

as for other things. wait, there are no other things. unless of course we're referring to pandas. in which case: PANDAS ARE AWESOME, OK?